After reading up on the issue, and listening to Mayor Allender's presentation, I have decided to support the new Civic Center.  My only question now is, would that money be better spent getting the railroad out of town and fixing our roads?  But I think now those issues are separate.  We have to spend money one way or the other on the civic center. We may as well build something now that will be viable for many years to come instead of trying to coax the old civic center into years beyond its ability.

city council to vote in February

"A special city council meeting will be held in February to determine the future of Barnett Arena and Rushmore Plaza Civic Center.

The council will be presented with two options — remodel Barnett Arena or build a new facility — and then asked to approve a funding plan.
Mayor Steve Allender said in an interview that he will hold more public presentations on the two options in January and February, ahead of the special meeting. An exact date for the special meeting has not been set. "

Drive around any non-artery in our city streets and see for yourself that most need resurfacing at least.  The streets around south Walmart like Enchantment Road and Parkview Drive are so wavy you'll probably get seasick driving them.

The problem with building a new arena is that we will be throwing all our money into one huge project instead of spreading it around where many things could be fixed.  We've apparently already decided we're willing to spend quite a good amount of money. Let's now sit back and think about what best we could be spending that money on.

Posted by Jeff Jacobsen at 6:46 AM No comments:

The latest plans for civic center

"Rapid City Mayor Steve Allender discusses the findings of the Civic Center Resolution Task Force, and outlines the challenges, obstacles and options for the future of the Barnett Arena. Enjoy the following presentation by either watching the entire video, or using the below links to view the section that most interests you."
Posted by Jeff Jacobsen at 6:23 AM No comments:

Proposal to use city property at Omaha and Mt. Rushmore Road for solar panels 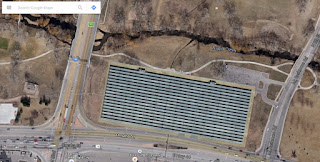 Hi,
I'd like to propose a use for the city property on the northwest corner of Omaha Street and Mt. Rushmore Road.  I would propose that the city build a solar panel farm there that would provide power to the Central High School, and perhaps even to the Civic Center.
This proposal would:
* make an economical use of the property, since it would be providing "free" electricity to the high school once its' paid for.
* provide vocational training for high school students who will learn how their school is powered.
* be relatively cheap because the land is already city-owned, and the power line to the high school would be quite short.
* indicate that Rapid City is a city that is keeping up with technology and is environmentally aware.
I do not know the actual technical nor economic details other than the above.
Attached is an overlay of the property with solar panels from a solar farm in Arizona.
If you would like more information about this idea please feel free to contact me and I can make a more detailed report.
Sincerely,
Jeff  Jacobsen
Posted by Jeff Jacobsen at 7:01 PM 1 comment:

petition for Civic Center to move Tyson to larger room

Why didn't the Civic Center just make it harder for the scalpers to grab all the tickets?  Maybe they need to spend a little on a software upgrade?


Posted by Jeff Jacobsen at 8:40 AM No comments:

SD pays less for education than most states

"NORTHERN HILLS — When it comes to education spending, South Dakota is definitely in a slump and has been for quite some time. As a result, local school districts struggle to keep programming alive and teacher salaries competitive.
According to U.S. Census Bureau data assessed recently by the Black Hills Knowledge Network, South Dakota spends about a third less than neighboring states on education as a proportion of personal income.

Already last in the nation for teacher pay, South Dakota also ranked last regionally and 47th nationally in 2012 for its spending on K-12 education as a proportion of personal income, according to the most recent U.S. Census data available.  "

This is ridiculous.  Education is hugely important for every aspect of a person's life and for a community.  We are hurting ourselves by pretending that taxes are evil or whatever.

Posted by Jeff Jacobsen at 8:41 AM No comments:

"According to a news release from the district, the linchpin of the deal is an agreement to divert $4 million in capital outlay funds toward general fund expenses, and then use the freed-up $4 million in the general fund to raise teacher pay.
The budget maneuver is allowed by a state law that was adopted in 2009 and was supposed to sunset in 2012 but has since been renewed through 2018."

This is where our money should go first.

Posted by Jeff Jacobsen at 7:32 AM No comments:

I started this blog because I believe that the way a city spends its money shows the character of that city. At the same time Rapid City planned to expand their civic center way beyond what it needs at this time, the school district was laying off teachers and staff because it is being starved of funds. I am proud of the education I got here from kindergarten through the 9th grade and I want to make certain that our schools are well-funded and stable.